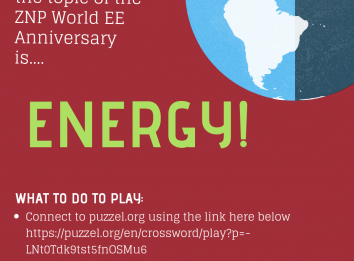 What is energy? It can be defined according to the context. In physics, energy is the quantitative property that must be transferred to an object in order to perform work on, or to heat, the object itself. We know many forms of energy: kinetic, potential, elastic energy are just some of the most common examples. But also the radiant energy carried by light or the thermal energy due to an object’s temperature, and of course the chemical energy released when a fuel burns. This last one is the energy that let our bodies stay alive, obtained by “burning” the fuel we get from food.
Since the very beginning of human culture, we’ve been looking for energy source in nature to live and work, as we said, but also for other purposes, such as heating or cooking. Later on, man’s creations got more and more sophisticated and required energy too. Eventually, in XIX century, a new form of energy came up and in a short time it became essential to our lives: electric power.
Since that moment, our society grew (and is growing) unbelievably needy of it, so much that nowadays it’s unthinkable to do without, especially in Western industrialised extremely “energivorous” communities. For example, the average European uses 27 megawatt-hours (MWh) annually, including all domestic, industrial and transport sources (this figure varies widely between countries). This last one, transport, is now the largest consumer of energy. But how to get it? Coal, oil and natural gas, the so called “fossil fuels”, historically supplied the energy we have been needed for hundreds years through their combustion. But today, mankind is aware of the huge damage they cause to environment, climate, biodiversity, and even human health. Not to mention that fossil fuels are not limitless – that’s why they’re called “non-renewable” – and the process to extract them from the underground deposits is getting more expensive and less favourable if compared to the quality of the raw material. Keep using this kind of energy source, closing our eyes in front of such inconvenient truth, is fool and is also leading the ecosystems to the collapse. Changing deal is then necessary and pretty urgent. Of course not to “save the Earth”, as often said. The planet will overcome it, but what about mankind? We need to save ourselves.
Fortunately, new technologies are raising and spreading quickly all over the world. Sunlight, wind, rivers, sea waves and tides, heat coming from the deep earth. We are now capable of exploiting all of these renewable energy sources without (or just a little bit) ruining the environment. Actually, renewable energy systems aren’t a recent technology at all: prototypical turbines popped up in Glasgow, Scotland, Ohio and Denmark at the end of 1800; the first solar array appeared on a rooftop in New York City in 1884; in 1904 in a small village of central Italy, five lightbulbs were lit by a mechanical device powered by geothermal steam. All of those inventions are pretty old, but were investigational products, very expensive and with low benefit. In other words, not interesting for business. The oil crisis of ‘70s reignited interest, investments and invention. This modern resurgence paved the way for where the renewables industry is today with its worldwide proliferation, dropping costs and heightened performance.
In Europe, fossil fuels still dominate the fuel mix: about 77 % of the energy needs of the average European are met by oil, gas and coal. Nuclear power provides 14 %, with the remaining 9 % coming from renewable energy sources. However, renewable energy is increasing rapidly; in 2010, solar photovoltaics was the biggest source of new installed capacity, with new gas and wind coming second and third respectively.
What can individuals do? Choose a renewable energy source for your domestic use; prefer goods produced without fossil fuels; turn off the lights when unnecessary, in order not to avoid wastes of electricity; then love your place, enjoy the “outdoor”, use more the chemical power of your brain and muscles than the electric power of your playstation or smartphone – even if, I know, you’re probably reading this article on it… then use it responsibly!

From October 14th to 26th, every day you’ll find here, and on our Facebook and Instagram pages, funny quizzes and games online to know more about environmental issues. You can play everywhere and whenever you want. Follow the anniversary!
Enjoy our crossword puzzle on puzzel.org. What to do to play:
1. Connect to the website using the link here below
https://puzzel.org/en/crossword/play?p=-LNt0Tdk9tst5fnOSMu6
2. Do the crosswords and disclose the mysterious word!