The essence of the project “Creating a biomass composting mechanism for preserving biodiversity in NATURA 2000 areas”. In the areas of Natura 2000 – Žemaitija National Park, the area of 21189 ha, and Reiskiai Wilderness Swamp (“Reiskių tyrų pelkė”), the area of 4046 ha, valuable grasslands, pastures and wetlands situated in the state forest land are quickly covered with grass (the total area of 192 ha), and biodiversity there, including 2 strictly protected and 42 rare species, is also disappearing. Both of the said NATURA 2000 areas are assigned to the directorate of Žemaitija National Park. The directorate evaluates the overall condition here, as well as the condition of natural habitats and rare species, carries out monitoring and organizes environment clean-up work. In order to preserve valuable open grassland-wetland habitats, it is necessary to cut down bushes, mow grass and remove the biomass. Until now, Telšiai State Forest Enterprise had no interest in open habitat management because they had no necessary machinery for mowing, biomass collection, and the collected biomass could not be utilized. The biomass collected from the prospective 192 ha of grasslands and wetlands will be used for Telšiai State Forest Enterprise nursery compost production. Plateliai community will contribute to the project by participating in a seminar on biodiversity and biodegradable waste.

The project “Creating a biomass composting mechanism for preserving biodiversity in NATURA 2000 areas” activities were funded at 100 percent and  completed by 30th April, 2017.

Why did the idea to manage open habitats in Žemaitija National Park and Reiskiai State Telmological Reserve was born? Both areas are in Natura 200 ecological network, where open habitats and species that live in them are preserved. Natural meadows, grasslands, wetlands are a natural asset. They have survived the greatest biodiversity, many rare species. If there are no open spaces left, the landscape will uniform, and the habitats of medicinal, melliferous and other plants and animals living in them will disappear. Unused meadows, grasslands, wetlands gradually turn into forests because they are in the forest area.

When submitting an application, there was the requirement “to establish a mechanism of open habitat conservation.” We were thinking what kind of mechanism could it be? We discussed the issue with Telšiai State Enterprise. It turned out that they had an 80-hectare nursery, which needed compost. The project was assessed by the size of areas, protected habitats and species abundance. Therefore, we chose not only ŽNP territory, but it also Reiskiai Telmological Reserve which is the territory of Telšiai State Enterprise and assigned to ŽNP care. The Forestry had lacked in machinery for the management of open habitat, biomass transportation, equipment for compost production, thus we planned to buy them from the project funds. The project was called “Creating a biomass composting mechanism for preserving biodiversity in Natura 2000 areas”.

The aim of the project – to create a sustainable and long-term biomass composting mechanism preserving open habitats biodiversity in NATURA 2000 areas and to involve the local community in the project activities.

The following project activities were put in action:

Publicity: seminars (3), articles published in the press (3), on the websites (in Lithuanian-English) www.zemaitijosnp.lt and www.telsiuuredija.lt (4); publicity boards (2), the final conference on 15.04.2016.

The advantage of the project – all the project activities were funded at 100 percent, the total project budget EUR 642 800, payments for activities are made every 3 months.

Disadvantage: The project was included in a reserve list and did not receive full funding (about EUR 290 000), the composting site was not installed. We hope to install it from another EEA funding phase. 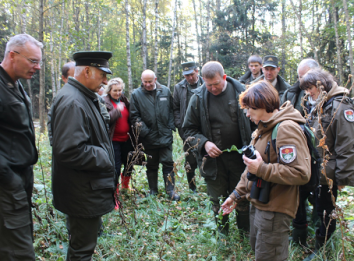 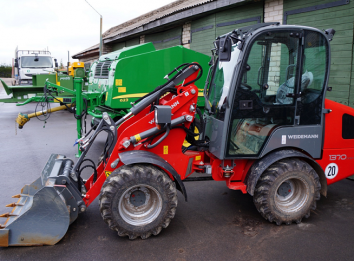 The new equipments and tractor in Telšiai Forest Enterprise. 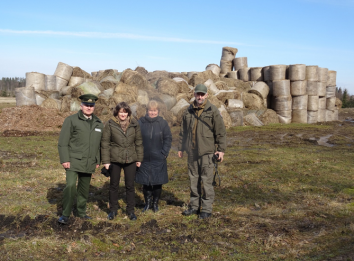 Approximately 200 rolls were brought to a nursery in Patausalė village, where the composting site was not installed in this project. We hope to install it from another EEA funding phase. 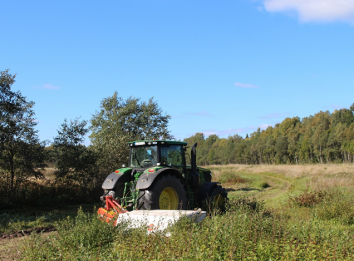 The haying with a new tractor and haymaker. 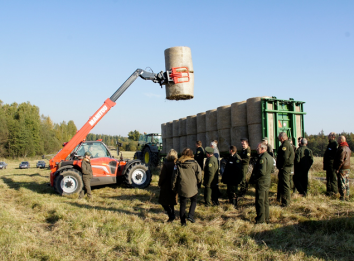 The biomass was collected and rolled, approximately 200 rolls were brought to the places from which Telšiai Forest Enterprise with the purchased machinery transported them to a nursery in Patausalė village. The seminar participants in Reiskiai.