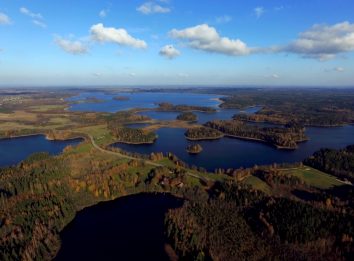 The winter that is already coming and the end of the year makes a good reason to stop for a while and look back. I think that many of us will admit that this year was a very different one from what we experienced in the past. It’s interesting to look at the natural processes that are going on. It’s hard to overview all of them. But one phenomenon, probably everyone will agree, was exclusive, and has not been the case for many years. This is a huge amount of rainfall. According to the statistics published by the Lithuanian Hydrometeorological Service, in September, the Standardized Climatic Norm (SCN) ranged from 1.5 to 2.5, reaching 2.8 in Skuodas area. There was even more precipitation in October: SCN 2,3-2,8. Moreover, the distribution of rainfall during the month was quite uneven. The Lithuanian Hydrometeorological Service repeatedly recorded a natural phenomenon, a very heavy rainfall. The consequences of such rainfall can be seen by everyone. It is the over flooded fields and meadows, rivers that have come out of the shores, the flood in Nemunas delta that continues for already a month, flooded streets in Vilnius, Kaunas, Klaipėda etc.

Zemaitija National Park also witnesses the significant consequences of the heavy rainfall. Someone has already covered the basements of the house, the swamps are full of water, the rivers get stuck and hardly manage to take the accumulated water towards the Curonian Lagoon. Even such a large lake like Plateliai, which does not have large tributaries and is fed by small streams, springs and rain water, is filled with water. Since 2013 the Administration of Zemaitija National Park has been carrying out water level measurements with a permanently installed automatic water level monitoring system. In recent days, having analysed the data collected during the year, we found that the water level of the lake almost reached the fixed record water level during the whole observation period, with only 1.4 mm missing. On 22 November the highest water level this year was recorded – 146.6305 m above the sea level. During the entire observation period, a higher water level was only fixed on 25 February 2016, when the water level of the lake was 146.6319 m. Usually the normal water level in the lake is 146.30 m above the sea level. Particular attention should be paid to the fact that this year the lake’s water level has risen the fastest since 2013. The data quite clearly illustrates how rainy this autumn has been. And now it’s time to wait for a beautiful and white winter, to admire and wonder about the miracles that the nature is bringing to us.